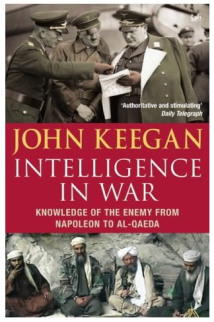 I have just finished reading Intelligence in War by John Keegan. The book covers the effect of intelligence on warfare from Napoleonic times to today. This is achieved by covering a number of campaigns that serve as an example:

The coverage on intelligence on modern times, dominated by technology and still partially secret, is quite short – A few pages about the Falklands war, and a short discourse over terrorism.

The main claim of the book is that intelligence is important in warfare, but usually not the decisive factor. While superior intelligence (and properly exploiting it) can win battles, a prolonged war will be won by the stronger force – maybe best illustrated by the American Civil War.

The book is very enjoyable to read. As a gamer, it awakened my interest in playing battles of the American Civil War and the naval battles in the First World War. Its main focus is on the Second World War. I would have liked to have more accounts of intelligence in war after the Second World War, instead of the part on terrorism that seems to be added as an afterthought. Still, highly recommended!