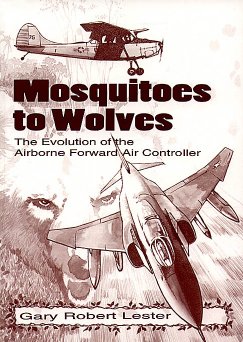 The use of Forward Air Controllers is an interesting aspect of aerial and ground warfare. Mosquitoes to Wolves by G.R. Lester describes how airborne FACs matured during the Korean War. Flying the T-6, the “Mosquitoes”  directed close air support strikes and interdiction near the front line.

Sadly, lessons learned in Korea were all but forgotten ten years later and had to be re-learned in Vietnam. FACs started out flying the O-1 and later O-2 and OV-10 aircraft for support of troops in contact and for interdicting travel on the Ho Chi Minh trail. A dense network of air defenses made it necessary to try faster airplanes – first the “Misty” F-100Fs and later “Laredo” and “Wolf” F-4s.

The author emphasizes the importance of effective forward air controlling and its impact on the war. He describes the difficulties due to Air Force doctrine and inter-service communication needs.

A very recommendable read for anyone interested in forward air controllers and the Vietnam War. The book can be downloaded here. For more information on FACs and the air war above Vietnam, this page is a good starting point.