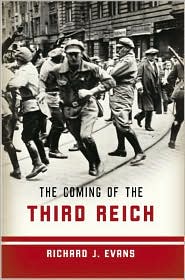 I have recently finished reading The coming of the Third Reich by Richard J. Evans. The book is the first in a trilogy covering the rise and and fall of the Third Reich. This first book covers the period from 1871 (the beginning of the second German empire) to the summer of 1933, at which point the Nazis were established as rulers of Germany.

The author thoroughly investigates the causes that led to the rise of Nazi power. He identifies the defeat in the First World War, the failure of Weimar democracy, and the economic hardships of the 1920s as destabilizing factors that made the Nazis’ rise to power possible. He also clearly shows the effect of Nazi violence in suppressing opposition, and how antisemitism was part of their policy from the very beginning.

Evans also tries to answer the question whether these events were inevitable or could have been prevented. It is quite clear that there was a total failure of law, police, and politics in fighting Nazi actions (such as the 1923 putsch) and violence. From the very beginning, the Reich chancellors’ use of emergency powers undermined the parliamentary democracy, setting a precedent for Hitler’s actions after the 1933 Reichstag fire. Even as late as 1932, a goverment supported by the military might have been able to stem the tide. It might have led to civil war, it might have led to a war in Europe in an attempt to reverse the conditions of the Versailles treaty and appease the German public, but it would not have led to the Holocaust.

The book can in parts be a bit daunting to read due to its detail and the many persons mentioned. I can only advise to bite through, as this is quite possibly the best accound of the Third Reich’s beginnings. I will definitely have to read the two sequels, The Third Reich in power (covering 1933 to 1939) and The Third Reich at war (covering the war years from 1939 to 1945).