I have assembled some general information about the organisation of US forces in Vietnam. Please note that these varied greatly in the field, and companies were generally understrength, with 60 soldiers or less being no exception. 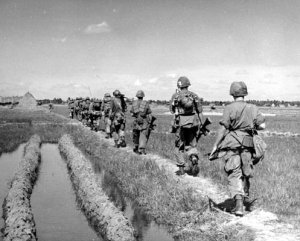 Medics were assigned to the Battalion, with usually one medic then assigned to each platoon. Weapons platoons were essentially immobile without vehicles and thus assigned to base defense.
Source: 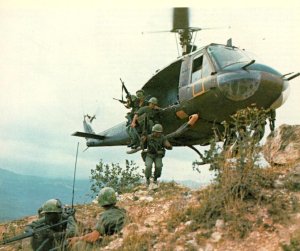 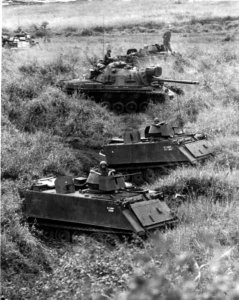 If available, M113 ACAVs were used. The infantry squad was usually spread out amongst the troop. 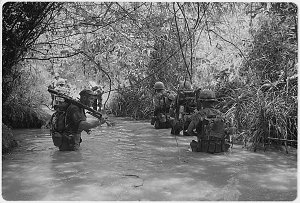 Marines used the M-14 instead of the M16 prior to 1968.
The Automatic Rifleman carried an M-14 with bipod, essentially a SAW. It was often retained even after the switch to the M-16.
AT and MG teams were usually distributed among the rifle platoons.
Source:

Several LAWs would be distributed among the platoon members. A platoon composed like this would be generic enough to serve for all three companies mentioned above. Note that the Marines wore flak vests much more regularly than the army and used the M-14 prior to 1968.

A cavalry platoon would consist of six M113s, one mortar carrier, and three M48s. For gaming purposes dropping an M48 and one or more M113s is definitely an option. The infantry could be composed of squad leader, one fireteam, and an MG team as above.